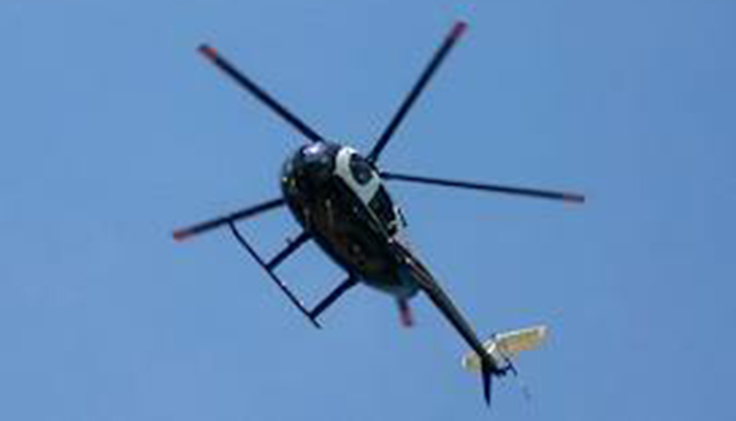 Scotland Yard is using the power of Twitter to reduce the number of noise complaints about low-flying police helicopters in London. Officers in the Met’s Air Support Unit say support from the public has grown and calls about helicopters disturbing people’s sleep have dropped since they began tweeting about operations. The unit, which is based at Lippitts Hill in Essex, launched the account — @MPSinthesky — in January and it now has more than 25,000 followers.

Officers say that since then the num­ber of people complaining about the force’s night operations has fallen significantly — despite a huge increase in flights during the Olympics.

The Met says it recorded 81 complaints between January and December this year, compared with 97 last year — a fall of 16 per cent. Officers with the ASU tweet from a control tower at the base where the Met’s three Eurocopter EC145 craft are stationed.

They reveal details of the helicopter’s role in searches for burglary suspects, missing people and vehicle pursuits.

The officers tweet as near to real time as they can to avoid giving details of their operations to the criminals they are trying to catch.

Sgt Richard Brandon, operational head of the ASU, said: “Tweeting has had a massive impact on the number of complaints about noise. People hear the helicopter but get frustrated because they do not know what it is doing.

“Having a helicopter flying low over your house at 4am can be disrupting and annoying. But if people are following us on Twitter they can see what we are engaged in.

“If they see that we have just caught a burglar in the next road then they know we were there for a good reason. It can be reassuring.” He added: “At first we thought it was a bad idea, that it would give away too much detail of how we operate and that we would be too formal, but I think it’s one of the best things we’ve ever done.

“We have won over people who were opposed to us and we have built up a good relationship with our followers.

“People who follow us on Twitter think, ‘That’s my helicopter’, and that is great because we are here to serve the people of London.”

The Met’s three helicopters carry out about 10,000 jobs per year, most of them in response to events such as car chases or searches for missing people, but about 1,000 are pre-planned.

One — code-named India 99 — has advanced camera systems and thermal imaging equipment and is deployed almost daily in hunting burglars in people’s back gardens or targeting robbers and rogue motorists.

Wing beat: the Standard takes a flight with the sky police

As soon as we are airborne calls begin coming in from ground units requesting assistance. The first concerns a suspect hiding on a rooftop in Tower Hamlets. He surrenders to police as we arrive.

A more urgent call immediately takes precedence. A camera that automatically reads car numberplates has “pinged “ a Porsche Cayenne as linked to “serious and organised crime” on a road in east London. Covert cars prepare to stop it and ask India 99 for support in case the driver tries to make a run for it. From his vantage point, air observer Pc Hugh Dalton zooms in with a powerful camera lens. We can see the driver as if he were a few feet away. The driver co-operates and talks to police and the helicopter flies away.

For five minutes the helicopter carries out routine anti-burglary and robbery patrols in Croydon. Then the ex-Navy pilot makes an abrupt turn towards Alexandra Palace to respond to an urgent call — a road rage drama with a knife.

At a maximum speed of 140mph, bobbing and weaving in the turbulence, the helicopter takes just five minutes to arrive but already the trail for the wanted car is going cold.

The crew comb the streets nearby for the VW but are pessimistic about success. They are diverted to an east London park to help search for a woman who is believed to be suicidal.

Then another urgent call comes to assist a vehicle pursuit in Clayhall. The suspect — grey tracksuit, cropped hair — evades the ground units and the chase ends in a cul de sac.

But as we hover 1,500 feet above the streets, Pc Dalton focuses on a man walking nonchalantly down a side street. The description matches and ground units are called in. We watch from above as marked cars close in silently on the unsuspecting suspect. He is arrested and identification is confirmed. The crew is quietly jubilant.

Helicops use Twitter to tackle complaints of noise nuisance