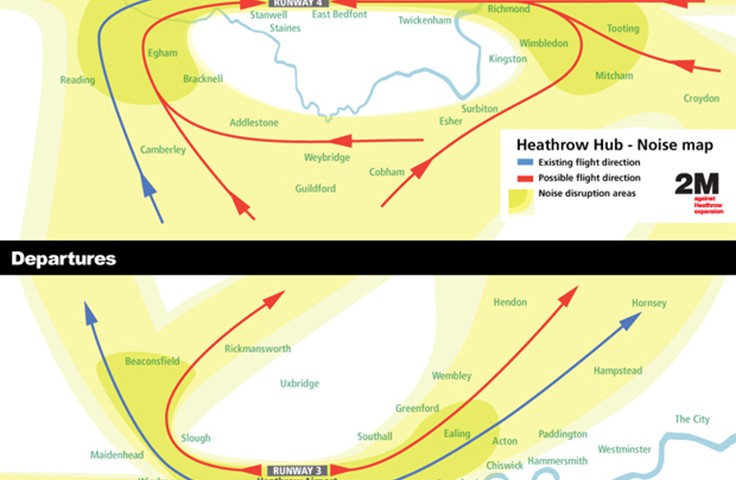 PEACE and quiet in north-west Surrey could be drowned out forever if Heathrow Airport is allowed to develop into a four-runway hub, according to new research by an anti-expansion group.

The 2M Group, led by the Conservative-controlled London Borough of Wandsworth, is an all-party alliance of more than 20 local authorities concerned about the environmental impact of Heathrow expansion on their communities.

The group, of which Spelthorne Borough Council used to be a member until switching allegiance and backing the airport, has produced noise contour maps showing areas that could be affected by aircraft from a four-runway Heathrow.

It is already feared that tens of thousands of residents in Spelthorne could be forced to move from their homes to make way for the expansion.

The maps are colour-coded to show which areas would be most adversely affected by noise – with the towns and villages in darker shading bearing the greatest brunt.

According to the maps, there would be an increase in noise for Staines, Egham, Virginia Water and Thorpe, as well as what was left of Stanwell and Ashford, plus parts of Elmbridge.

He said: “The opposition from 2M and residents would be so great that it probably makes the whole project politically impossible.”

The 2M Group has consistently warned that Heathrow will not stop expanding if granted a third landing strip.

A spokesman for the airport said: “We are currently examining a number of options, all of which result in significantly less noise for local residents than the 2M Group’s scaremongering.

“We know aircraft noise can disturb people living under the flight path, which is why we encourage airlines to fly only their quietest aircraft at Heathrow through higher charges for noisier aircraft.”

The airport’s main European rivals have four or more runways and Heathrow will need to match their capacity to directly compete.