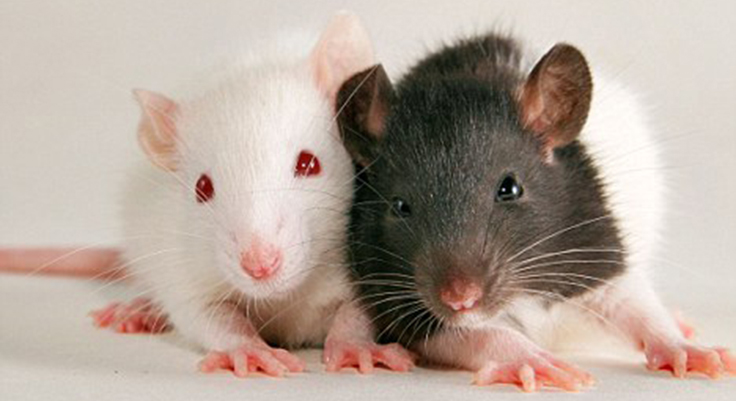 Sound sensors: The delicate sound-detecting cells in the inner ear can be damaged and die after exposure to loud noises or toxic compounds (top), but they can be regenerated with a drug (bottom).

Listen up, live music fans. The hearing loss caused by exposure to loud noise can be at least partially reversed with drugs, according to a study published by U.S. and Japanese researchers last week in the journal Neuron.

The work is the first proof that a drug can spur regeneration of the mammalian ear’s sound-detecting hair cells, which can be damaged by noise exposure. While the hair cells of some animals, such as birds, can regenerate on their own, the hair cells of humans and other mammals cannot. The cells may be damaged by infection or as a side effect of certain drugs as well as after exposure to loud noises.

Previous research has hinted that gene therapy might be able to induce regeneration in the adult mammalian ear. Now, Albert Edge, a stem cell biologist at the Massachusetts Eye and Ear Infirmary and Harvard Medical School, and colleagues have shown that a chemical compound can do the same by stimulating supporting cells to develop into new hair cells.

The drug used in the study inhibits the activity of a protein called Notch, which Edge’s lab and others had previously shown prevents supporting cells from turning into hair cells. “It’s like taking the brakes off the car,” says Edge.

The drug was first developed to treat Alzheimer’s disease, but it failed—partly because inhibiting Notch, which regulates many genes within the body, causes side effects.

In the study, an oral dose of the drug improved hearing and increased the number of hair cells in deaf mice, but it also had significant side effects. So the team tried delivering the drug directly to the inner ear, where it should be unlikely to reach the rest of the body, says Edge. “When we treated [the mice] with the local delivery of the drug, they seemed perfectly healthy,” he says. “But before this would be able to be used in patients, we would have to make sure of that.”

A month or so after treating the mice, Edge—working with stem cell biologists Kunio Mizutari and Masato Fujioka of Tokyo’s Keio University School of Medicine in Japan—found that some of the supporting cells in the animals’ ears had turned into hair cells. The mice that received this treatment recovered about 20 percent of their hearing at low frequencies, says Edge.

The results are an important confirmation of previous indications that regeneration is possible in adult mammalian ears, says Alan Cheng, an ear, nose, and throat doctor and scientist who studies hair cell regeneration at the Stanford School of Medicine. “But it will require a lot more work to validate its utility in different models of damage—to say in any definitive way that patients can benefit from it,” he says.

To see how much the drug improved hearing, the researchers placed a small amplifier into each animal’s ear canal and, working in a soundproof room, looked for electrical activity in the brain stem in response to sounds. “The mice, before treatment, don’t respond no matter how much sound we put in,” says Edge. After the treatment, however, the team could detect electrical activity in response to loud, low-frequency sounds.

There is still a lot of work to be done before this drug, or a similar compound, could be used to treat human patients. “The recovery of hearing that we found is quite small,” says Edge. “In human terms, the mice went from profoundly deaf to being able to detect fairly loud sounds at a low pitch.” Next, the team will explore whether the drug can regenerate hair cells damaged by trauma other than noise, such as exposure to toxins.

Cheng also notes that while the mice were given the drug soon after noise exposure, most people will not seek diagnosis or treatment until long after the damage occurs. Hearing loss in humans generally isn’t diagnosed “until days or weeks have passed,” he says. “Whether the treatment is useful in a delayed fashion has to be teased out.”