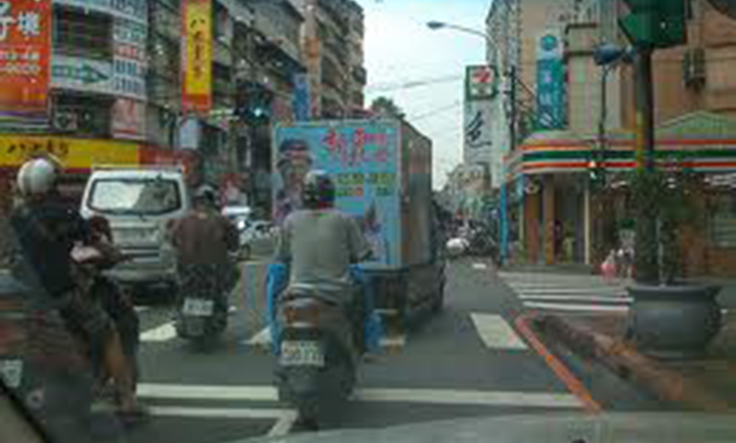 “You hear the customers chatting, the shop owners yelling out the orders, and sometimes the boys and girls arguing below,” said Mr Lin.

“The noise doesn’t stop when they shut down, because the shop owners chat with each other until 03:00.

“Then the cleanup people they’ve hired make noise until 04:00. They’re followed by the government’s own garbage collectors who make noise for another hour,” he said. “You cannot live and you cannot sleep.”

Noise has always been a part of life in Taiwan, especially during its rapid industrialisation from the 1960s to 1990s.

But in recent years, people have become less tolerant of it.

The number of complaints has risen by 15% a year, to some 58,000 last year, according to the government’s Environmental Protection Administration (EPA).

That has forced the EPA to recently announce plans to toughen regulations.

Starting next January, the maximum amount people can make across the board – from homes, to businesses and factories – must drop by three decibels, which would cut the volume by half, officials say.

The time period when people can make loud noise has also been shortened.

The measures will be the toughest ever taken, said Chou Li-chung, an EPA official in charge of dealing with noise.
Continue reading the main story
“Start Quote

“Because of the property market boom, there are more buildings, restaurants and businesses. But at the same time, people’s lives are more stressful now,” said Mr Chou.

“They want a peaceful environment. They want a better quality of life. That’s why we’re making our regulations tougher.”

The island’s population of 23m people is equivalent to that of Australia, but Taiwan is only a fraction of the size. Most Taiwanese live on just one third of the land; the rest is uninhabited mountains.

With scarcity of land, there’s little zoning – residences, businesses, offices and even some factories are mixed in the same neighbourhoods.

On many streets, the first level of a building is crammed with shops, such as cafes, shoe stores, boutiques, wonton and dumpling eateries, bakeries, hair salons and drug stores. And on the pavements are peddlers hawking snacks.

Above all of this are flats, offices, and more businesses.
A construction site in operation in a neighbourhood in Taipei, 16 July 2012Many residents in Taipei say they find noise levels intolerable

Some of the noise is typical of any developed country – jackhammers, drills and car alarms. But some are telling of Taiwan’s lifestyle: herds of scooters – they’re cheaper than cars and easier to park, but louder.

Even late at night, residents can be kept awake by a nearby restaurant’s loud pet goose, supermarket or restaurants’ ventilation fans and freezers, temples or businesses setting off firecrackers to seek divine protection at ungodly but auspicious hours.

Among the top noisemakers are flat renovators. Since almost everyone lives above, below or next to each other in apartment buildings, the sound can be overwhelming.

Many people put up with it, thinking they might need to remodel one day. But in recent years, many have complained – about one third of noise complaints in Taipei involve remodelling.

Projects can go on for at least a month. Just as one ends, another begins. If a group of investors have bought entire floors of a building, the project can last as long as a year. And work is allowed even on weekends.

In some categories, Taiwan’s regulations are more lenient than that of Japan and China.

“The problem is our entire government puts the economy ahead of everything else,” said resident Chang Chia-fong.

She and others complain that shops are allowed to open even where it is against the law. And when noise police go out to investigate cases, they often don’t issue fines, just give violators time to fix the problem.
Changing lifestyle

A few decades ago when Taiwan was still a developing economy, people were willing to put up with a lot more noise. But now it is a major high-tech centre.

With better jobs and more money, people want a higher quality of life and that includes a quieter environment.

Over the years, the government has taken steps to address the problem, including regulating low-frequency noise like water pumps, and reducing maximum decibels.
Inspectors from Taipei’s Department of Environmental Protection read a sound level meter in Taipei, Taiwan, 16 July 2012The government has received an increasing number of noise complaints in recent years

But it is facing challenges trying to balance the increasing desire for a quieter environment with the need for more economic growth.

Some of the noise-makers argue that noise is inevitable.

“We’ve tried different ways to reduce the amount of noise and vibrations,” said Tsai Sin-fu, a manager at a residential building construction site.

“But people still complain. We try not to let them feel the effects, but we have to finish our construction project.”

There is already criticism that the new rules are not tough enough. But Taiwanese people are unlikely to get any peace and quiet soon.

In anticipation of Chinese investment, major cities here are expected to see a rise in economic activity – and that means more noise.

Back in the Shida Night Market neighbourhood, several people developed depression as a result of the noise, residents said. One family did not open their windows for a year.

After banding together, they pressured the city government to force the vendors to shut down earlier. The businesses are now required to close at 23:30, but many were seen operating past 00:30 recently.

“It was a horrible way to live,” he said