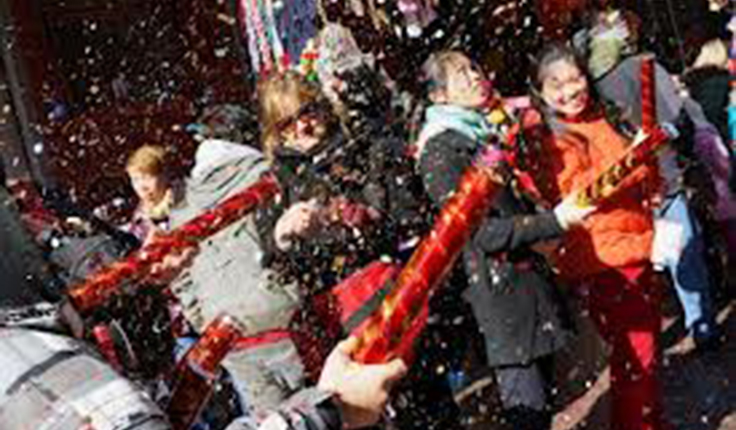 SHIJIAZHUANG, Dec. 9 (Xinhua) — Wu Xianzhou had to eventually call the police because firecrackers that were being set off by his neighbors kept him awake.

“I felt dizzy all day long. Firecrackers woke me at 6 a.m. At 9 p.m., when I tried to sleep, another round of firecrackers went off,” said Wu, who is in his 70s and lives in Xiangfuli Residential Community in the city of Tangshan in Hebei Province.

Noise pollution is a problem, especially at this time of the year. Setting off firecrackers is a Chinese tradition to celebrate weddings, opening of a new business or moving into a new home. Chinese people tend to arrange wedding ceremonies at the end of the year.

Although cities including Tangshan do not allow firecrackers to be set off in the city proper, enforcement is poor. Police usually turn a blind eye.

People realize the harm being caused to their health by the noise. They have complained about it, said You Jie, a police officer in the city’s Lubei District.

You said his police station in Wenhua Road has dealt with nearly 1,000 complaints about firecrackers this year. The police have issued fines in extreme cases.

Studies show that noise exceeding 85 decibels can cause hearing impairment and harm the heart. Long-term exposure to noise may lead to male infertility or miscarriage.

Apart from firecrackers, loud music in public squares is also a problem.

Last month, high school students from the No. 1 High School of Kailuan in Tangshan City protested about loud music being played in Fenghuangshan Park, a place where people dance.

They wore t-shirts saying “Dear grandpas and grandmas, uncles and aunts, would you please put your music down. We’re having lessons  Bless you. Thank you.”

Liu Sichen, one of the protesters, said although the dancing created a harmonious atmosphere, it was too loud. The noise made it difficult for the students to concentrate in class.

“The dance music drowned out our teacher’s voice,” he said.

In response, dancers decided to use smaller audio amplifiers so the music is not as loud.

To address noise pollution, authorities in Tangshan, Taiyuan, capital of Shanxi Province, and Guangzhou, capital of Guangdong Province, are mulling the idea of a “noise map”, where different areas can have different noise limits.

“With the mapping, both complaints and enforcement regarding noise pollution will be better exerted based on regulations,” said police officer You.