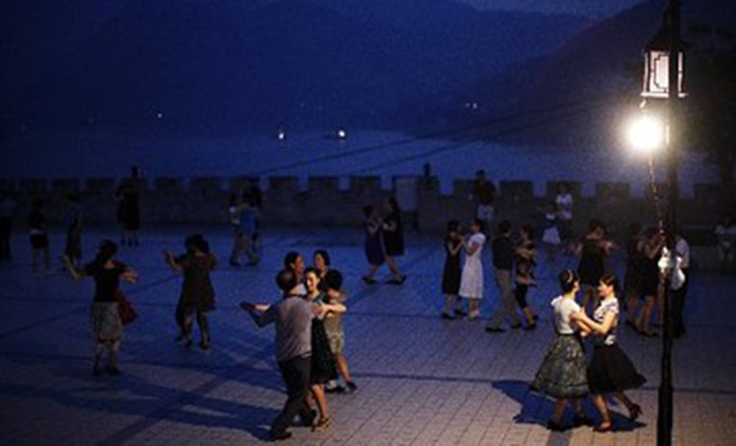 Where verbal abuse, sand and buckets of human waste have failed, a warning message blasted over and over again through a $41,900 speaker system appears to have succeeded.

Aggrieved residents in the coastal Chinese city of Wenzhou declared victory this week after successfully routing packs of public dancers that had been gathering in a nearby park, according to state media reports.

As WSJ detailed last week, dancing in public — a form of exercise that boasts roughly 100 million adherents in China, most of them middle-aged and retired women — has become a flashpoint in the country’s drive to urbanize.

Squeezed by development, China’s happy-footed seniors have been forced to take their dancing to parks, public squares, parking lots and other areas where sound from their portable sound-systems often carry over into the homes of nearby residents.

Some beleaguered residents have decided to fight noise with noise. At Wenzhou’s Xin Guoguang apartment complex this weekend, 600 residents launched a tit-for-tat “counterattack,” pooling 260,000 yuan to buy six professional-quality speakers. According to the Communist Party-run Hangzhou Daily, they set the speakers up on a fourth-floor balcony across from the park and used them to blast an ear-splitting message — “Please respect the noise pollution laws of the People’s Republic of China and immediately cease illegal activities!” — over and over again for hours at a time.

The newspaper quoted residents complaining that hundreds of dancers filled the park from 10 a.m. to 10 p.m., broadcasting music and disturbing their children’s studies. They tried many times asking the dancers to turn down the volume, they said, to no avail.

The head of the local residents committee, a man surnamed Wu, told the Hangzhou Daily that noise from the dancers had also affected the value of apartments in the area. “Everyone knows how loud it is here,” he said.

On Monday, representatives of the local administrative, environmental protection, park management and other bureaus responded to the speaker protest by convening a “noise in public squares” coordinating committee, according to a report posted on the website of the official Xinhua news agency. The committee agreed to set up a working group that would patrol the park. The residents have since dismantled the speaker system.

A day later, district officials said groups would have to register to hold activities in the park. They also said they would display decibel levels on electronic screens in the park to help dancers monitor their own noise levels.

“Some people might think it’s a lot of money to spend, but compared to the invisible losses we’ve suffered, it’s nothing,” Mr. Wu told Hangzhou Daily.

The Wenzhou group isn’t the first to prevail over public dancers by taking extreme measures. In November, a Beijing man successfully chased away a local dancing group by firing a shotgun in the air and unleashing three Tibetan mastiffs. He was later sentenced to six months in jail, but a neighbor of his suggested to China Real Time the sacrifice may have been worth it. “I’m glad they’re gone,” he said.

Elsewhere, though, the battle continues to rage on. In one residential complex in the central city of Wuhan, irritated apartment owners have been unable to deter local dancers despite hurling insults, threats and — in a moment of desperation – feces.