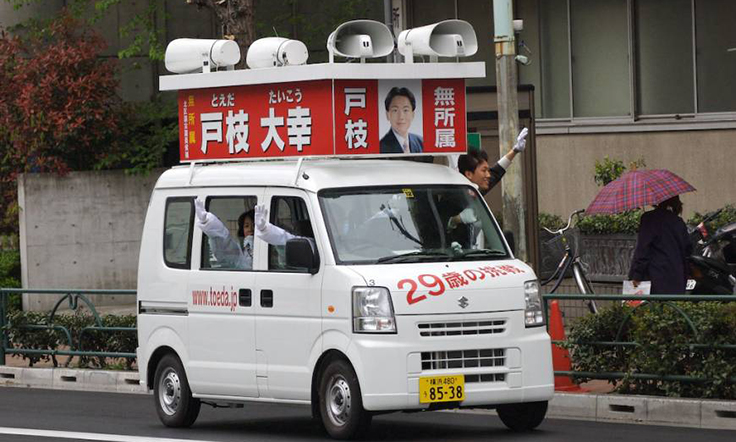 Yoshimichi Nakajima was waiting for the train one day at his local station in Tokyo when he politely asked the station attendant to lower the volume on his microphone. He was told that would be “difficult,” so Nakajima lent a hand by grabbing the mic and throwing it onto the track. He then recounted all of this to the station master, who was speechless. Nakajima, a rare breed of Japanese anti-noise crusader, has also taken a speaker from a liquor store and tossed it outside as well as seized a megaphone from a police officer.

“I’ve done such things on numerous occasions,” he said recently in an email. “And I never once regretted doing them.”

For a culture that places a high value on quiet, Japan can get pretty noisy sometimes, whether it’s the loud and long-winded announcements on trains and buses, the big cacophonous TV screens around shopping centers, the right-wing nationalists’ trucks that drive around blaring marching music and imperialist slogans out of loudspeakers or the infamous election campaigners who likewise promote themselves at ear-splitting volumes.

Though there are laws that limit most amplified sounds in public spaces, they typically aren’t enforced. Campaign trucks are even exempt from the laws, so in 2007 Yu Ito, then a member of the Metropolitan Assembly, set up the No! Senkyo Car network, whose anti-noise logo conveys that message.

When it comes to making noise in public, free speech trumps the right to privacy, a state of affairs that has driven Nakajima to distraction ever since he returned to Japan from Europe several decades ago and realized how noisy his native country is.

Nakajima, 68, is a philosopher and author of a series of books about noise in Japan, including his “Japanese are Half Fallen” (2005), where he provides an account of Japan’s irksome “culture of noise” that includes unnecessary announcements in train stations, the endless loops played in stores, talking escalators and ATMs, and the use of cranked-up loudspeakers just about everywhere. In addition to being a profound annoyance, he argued that such relentless noise desensitizes and even infantilizes people, rendering them docile. But despite his bold acts of protest, he acknowledged that ultimately nothing can be done because “most Japanese people don’t see ‘noise’ as a problem, and a large percentage of them actually want this ‘noise.’ “

Daniel Dolan, a professor of business communications at Waseda University, discovered this when he was writing a paper about the issue titled: “Cultural Noise: Amplified Sound, Freedom of Expression and Privacy Rights in Japan,” published in the International Journal of Communication in 2008.

Dolan, 54, who moved to Japan 20 years ago from Seattle, found that his Japanese wife and acquaintances couldn’t fathom the fuss when he broached the subject and expressed his dismay. Talking to Westerners, however, he encountered understanding, which jibed with a study cited in his paper that found Japanese are far more tolerant of environmental noises than Americans (and less likely to complain about them).

Nevertheless, Japan does have legally binding sound ordinances, much like those of the United States. To prove that these laws were being broken, Dolan took decibel readings with a sound meter where announcements were publicly broadcast and confirmed that they often exceeded the 70-decibel limit. But when he brought the evidence to officials at the local city office and asked why these infractions were permitted, they shrugged and explained that they were understaffed and just had to let it go.

From his research, which focused only on amplified sounds that can’t be avoided, such as those heard outside of stores or in the streets, rather than in places people choose to frequent, such as a pachinko parlor or train, he concluded that there’s one simple way to lower the volume of the soundscape.

“Sound management reform would consist of enforcing laws that are already there,” he said, “not necessarily creating new ones.” But despite the fact that such noise can raise stress levels and cause discomfort, to some at least, he has abandoned this line of inquiry. His paper didn’t lead to any discussion of the matter, and continuing to harp on about it would only alienate people anyway.

“It’s got to be something that Japanese people care about and push to change,” he said. “And I haven’t felt that at all.”

Chris Deegan, an anti-noise activist who hasn’t yet given up the fight, agreed that reform must come from within. Deegan, a 70-year-old translator from London who has lived in Tokyo for over four decades, was once all set to leave Japan because of this very issue. But then, by chance, he heard about an all-Japanese anti-noise group, Shizuka na Machi wo Kangaeru Kai — The Group that Thinks about a Quiet Town — and buoyed by a new sense of solidarity, decided to stay. After the founder quit out of despair, Deegan became the director of the group, which he said has about 60 members nationwide, who are “striving to make Japan just a little quieter.”

He is in charge of the group’s annual publication, Amenity, and organizes get-togethers among members, most of whom are Japanese who have spent some time in the West. Considering the Sisyphean struggle they are up against, they are utterly willing to compromise and have to settle for tiny victories. He and a few members once gently asked an agent at Tachikawa station to turn down the volume or increase the interval of a no-smoking announcement loop they found intrusive. To their surprise, he shut it off. However, six months later it was back on because, the agent said, lots of people had asked why that announcement was no longer broadcast.

“The problem was ordinary people,” Deegan said. “They don’t seem to be affected by it.” Group members also send letters to railway companies and local municipalities and write about their experiences for Amenity, whose latest issue is out this month. For him, the greatest sonic nuisance comes from the emergency PA systems in smaller locales that play melodies and regular announcements that can mercilessly go on and on.

“Ultimately, if we could get Japan down to the level of a Western European country, that would be fantastic,” he said. “But for the time being, if we can just drop the noise any small degree at all, we’ll be happy.”

Making noise about keeping the decibels down in Japan