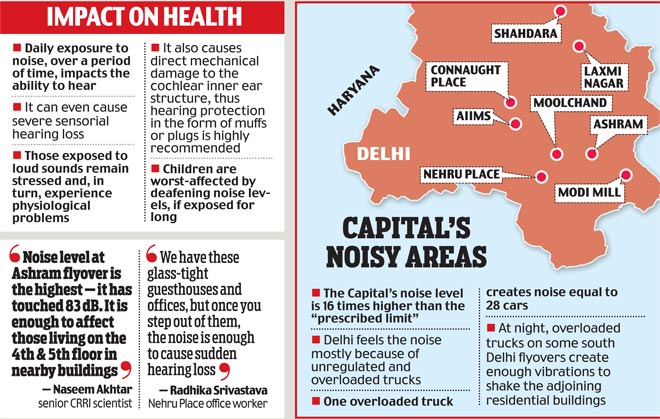 On May 5, the National Green Tribunal will meet government officials, traffic cops and residents to discuss solutions to noise pollution in south Delhi’s Panchsheel Park located along the busy Outer Ring Road.

A petition in the green court seeks relief for 5,000-odd residents who suffer as the noise levels in their neighbourhood touch 65-75 decibels (db), while the safe limit for day and night is 55 and 45 db, respectively.

They have already scored a partial victory when earlier the Tribunal directed the traffic police to declare Panchsheel Park as a no-horn zone, limit the speed of vehicles passing the area to 30 km/hr and fine the violators. Residents have been asked to grow green hedges to ward off the noise from the road. But they want a concrete sound barrier around the neighbourhood.

If these measures are effectively enforced, Panchsheel Park will be one of the few residential areas in Delhi to get some kind of sound-proofing.

Studies indicate that noise disturbance in Delhi is an environmental problem, as severe as air pollution, but few take note. We absorb the din without realising that it causes stress and messes up with our sleep. The World Health Organisation says that prolonged exposure to noise above 80 decibels can interfere with our immune systems, boost stress hormones, contribute to cardiovascular maladies and cause hearing damage.

In 2011, researchers from the Centre for Science and Environment travelled through Delhi, recording sound levels using a manual meter. They found the noise level going up to 100 db in the commercial and industrial zones, and 90 db in some residential zones during peak traffic.

At least 70% of these damaging sounds emanate from the ever-swelling fleet of eight million vehicles in a city of 17 million people. In 1910 when England’s Oliver Lucas designed the first electrical horn attached to the automobile, it was to save lives. Until then, laws in England mandated that self-propelled vehicles must be preceded by a man on foot waving a red flag and blowing a horn for the safety of pedestrians and animals.

Today, incessant honking is often blamed on India’s poor road infrastructure. But most drivers do it out of habit. On Delhi roads, weaving through traffic is a proud art that involves constant honking. At 100-110 db, blaring car horns are comparable with noise from a rock concert or a running jet engine.

Honking is banned in India at intersections or near temples, schools and hospitals. But the rule is flouted every second. With a fine as low as R100, it doesn’t matter anyway. Such is the demand for louder horns that many foreign car makers have customised stronger horns for the Indian market.

Recommendations of the pollution watchdog include ban on pressure horns, extensive plantation of trees on the roadsides, encouraging use of noise-absorbent materials, adequate noise barriers, monitoring of loudspeakers and generator. While regular sound-mapping can check the extent of noise trauma, sound barriers can bring noise levels down by 5 db.

Above all, say experts, sound trauma can be reduced just by changing our habits. The horns are necessary to warn other road users or animals of the vehicle’s approach, or as a part of an anti-theft device. In all other situations, it is possible to drive without honking.

All you need to do is stick to the speed limit. Experts prescribe the two-second rule — staying at two seconds or one car length behind the vehicle directly in front of one’s car gives just about enough time to stop or manoeuvre the vehicle if the one ahead of you suddenly applies brake. For overtaking or changing lanes, use indicators. And remember, no matter how much you honk, you can’t make traffic jams disappear.

“Calling noise a nuisance is like calling smog an inconvenience,” said Dr William H. Stewart, former Surgeon General of the United States. After much prodding, our government has woken up to the problem of air pollution. There is no reason why it should sleep through the deafening noise that ails our city.