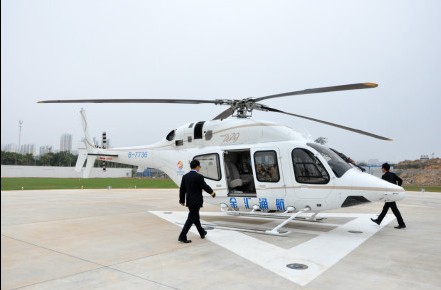 BEIJING: The introduction of a helicopter tourism service in Shanghai has resulted in a sharp resistance from the local people, who complain about noise pollution and the risks of the copters flying very low over the city’s skyline.

Within five days of its introduction on May 1, the helicopter service has already been forced to alter one of the routes over the Pudong area of the city. This follows a strong protest from a local school, Jincai High School, which said students were finding it difficult to concentrate due to the high noise.

“It was so loud that the pupils couldn’t hear what their teachers were saying,” Shanghai Daily quoted the school principal, Zhao Guodi, as saying. A teacher, surnamed Li, said: “On Monday, I had to stop three times during a single class because the noise was so loud.”

One of the school’s teachers actually lodged a complaint with the police.

Two companies, Yiyang and Kingwing, are jointly providing helicopter tours to visitors over the site, which was used for World Expo in 2010, the Huangpu River and the site of the Disney Resort, which is under construction. Tour lasts six to 25 minutes, and costs between 4,000 yuan ($640) and 12,000 yuan ($1920) each.

Yiyang said it has sought permission of the air traffic control to fly the copters at 300 feet height instead of the present height of 200 feet to reduce noise levels, and respond to complaints from Shanghai citizens.

“The sightseeing tours are new to the city, so we apologize for failing to take these details into account,” Ren Yibing, general manager of Yiyang Cultural Co, told the paper.

If the revised route continues to cause upset, it will be adjusted further, he said. Besides, the 12-seat helicopter used at present will be replaced by a smaller, and quieter, four-seater, for flying over highly populated areas, he said.

“My 22-month-old granddaughter runs into my arms and covers her ears with her little hands every time she hears the helicopter,” a 60-year-old woman surnamed Mao told the paper. “It’s not just the noise, you can also feel the pressure in your ears, like when a plane takes off,” she said.

An official from the neighborhood committee at Taolin area of Shanghai said he has received numerous complaints about the noise from the aircraft.