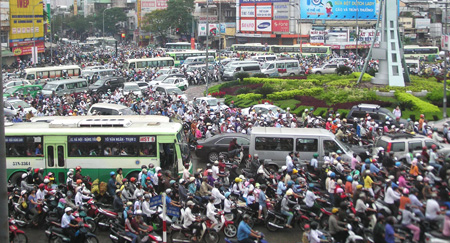 HCM CITY (VNS) — Noise pollution from street eateries, public broadcasting speakers, and neighbourhood karaokes has made hundreds of HCM City residents feel as though they are being tortured in their homes.

While affected residents said they could not stand the noise, local authorities in the effected areas claim they have carried out proper measures.

Ngo Hai Thanh (not her real name), a resident in the city’s District 12, said she has lost sleep for two weeks because of the noise from customers at a street eatery set up on in front of her home.

“The period from 8pm to midnight is the peak time for the eatery. Noise from tens of customers becomes a nightmare,” said Thanh, adding that sounds made during cleaning before the caterers leave the site for home ruin her final attempts to sleep.

Thanh works in a lawyer’s office and insomnia reduces her productivity.

In Viet Nam, street food is often served with alcohol, and people drinking alcohol speak louder than normal. To cheer their drinking, Vietnamese have their own slogan, “1-2-3-dzo,” which is a noisy trademark for Vietnamese street eaters and a nightmare to the ears of those who are not sitting at the table drinking alcohol.

Bach (not her real name), an elderly woman who is a resident of District 1’s Tran Quang Khai Street, said noise from eateries on the street causes her illness to worsen. Bach is 80 years old and had heart surgery just weeks ago.

“The eateries stay open until 3:00 in the early morning. Some of these people vomit and urinate on my fence, as well,” she added.

Meanwhile, residents in other areas of the city feel that noise from public broadcasting speakers can become unendurable. Since reunification in 1975, authorities installed loud speakers in every community for broadcasting daily news twice a day, in the early morning and at the twilight.

The speakers made a meaningful contribution during the hard times when people could not afford a TV set, a radio or a daily printed newspaper.

“I really need deep sleep after each hard night’s shift, but they turn the loud speakers on at 5:20am every morning. This causes me to suffer from insomnia,” said Tran Thanh Tuan (not his real name), a resident in suburban Binh Chanh District.

Tuan added that the speaker noise scares his son, awakening him, also.

Residents in Tan Phu District complained that they are fed up with the noise from karaoke, which is quite popular in the district.

Meanwhile, officials in the areas said they have dealt with complaints for many years and issued fines to those making noise. Dang Hai Binh, deputy head of District 12’s natural resources and environment division, was quoted by Tuoi Tre (Youth) newspaper as saying his office had hired individual teams to measure noise levels and issue fines.

However, Binh admitted that customers in eateries obeyed rules only when officials came to check. Afterwards, the noise continues, he said.

Further, Le Ton Thanh, deputy director of HCM City Department of Culture, Sports and Tourism, told the newspaper that monitoring noise pollution is the responsibility of ward authorities. The city authorities, in their licensing process, have regulated permitted noise levels.

Cao Chi Tam, a community head in Binh Chanh District, said loud speaker systems are required for the propaganda of the ‘new’ rural model meant for suburban and rural areas. He promised to reduce the street noise.

However, while officials spoke of restrictions applied to licensed karaoke services and authorised public speakers, no one has proposed a solution for noise from street eateries, which are found on almost every street in the city. — VNS