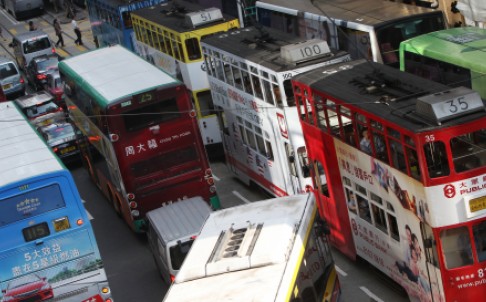 Fewer people are now exposed to excessive levels of traffic noise than were a decade and a half ago, but the problem remains an issue in old urban districts, environmental officials say.

The Environmental Protection Department says it is in the process of updating a 15-year-old traffic noise pollution map for the city.

The latest data available on the departments website is from 2000, and shows at least 1.14 million people were exposed to traffic noise exceeding 70 decibels, which is the planning standard.

The [department] is in the course of reassessing the spatial distribution of traffic noise over the whole territory based on more recent traffic census data and the reassessment work is expected to be completed later this year, a spokesman said.

It added that prevention of noise problems through active planning processes and implementation of traffic noise abatement programmes, including the provision of noise barriers and low-noise road surfacing across the city, had helped lower the number.

In 2000, at least 37 per cent of people in Yau Tsim Mong were exposed to traffic noise higher than 70 decibels, as were more than a quarter of residents in Kowloon City, Sham Shui Po and Tsuen Wan.

The noise map on the current website factors in the year 2000s population of 6.6 million a figure that has since grown by nearly 10 per cent. Traffic flow is also likely to have changed significantly in that time.

Chinese University noise assessment expert Professor Lam Kin-che said noise mapping was an extremely expensive and difficult project to conduct, but was a credible way to trace noise pollution to its source. He said it was normal that such a study took a long time to update.

The subcommittee had asked them to update this noise map before, she said, but added that more needed to be done as noise and light pollution were getting worse in certain areas, especially mixed commercial and residential districts.

Buildings are getting taller and there are fewer natural noise barriers. Noise pollution can seriously affect the quality of sleep and thus the health of residents.

A British study last month cited a link between traffic noise pollution and an increased risk of strokes and deaths, especially among the elderly. Experts in Hong Kong have called for health risks from noise pollution to be factored into environmental impact assessment reports.

But the department said a 2012 study it commissioned on 10,000 homes found no conclusive evidence that physiological responses due to noise exposure were associated with a long-term risk of cardiovascular disease.

Noise complaints have been dropping over the years. From 4,952 in 2010, they gradually declined to 3,859 last year. Complaints specifically about traffic noise have also dropped from 215 in 2010 to 88 last year. This article appeared in the South China Morning Post print edition as Fewer exposed to traffic noise as city grows

Exposure to Hong Kong’s traffic noise declines over 15 years, even as city grows