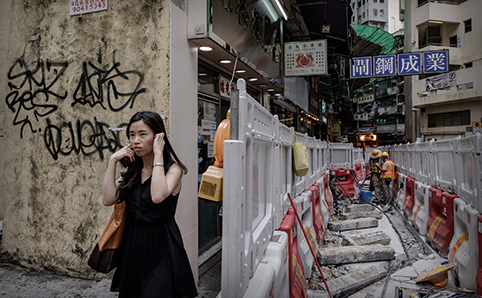 Time Out Hong Kong | Big Smog | A right earful: Hong Kong’s noise pollutionAs the government updates its citywide noise pollution map for the first time in 15 years, Rhoda Kwan and Anna Cummins explore the consequences of cacophony. Additional reporting by Dorothy Hou
Car horns, bus engines, unloading lorries, whirring drills – these are just some of the everyday sounds of our city. Excess noise is a blight on the lives of at least a million Hongkongers, but it’s one that we often put up with. The government recognises that one in seven of us are regularly exposed to noise levels above WHO (World Health Organisation)-recommended limits. And the impact of excess noise goes much further than making it difficult to catch the quiet part of your favourite show on Netflix. Research shows that exposure to road noise of an average 30 decibels (dB) at night, equivalent to a faint hum, can induce sleep disturbance. Noises over 35 dB have been shown to disrupt concentration at work or school. While it’s well known that long term exposure to loud noise can damage hearing, there are also behavioural effects that it can induce, such as irritability, increased aggression, stress and even depression.

The Environmental Protection Department (EPD) is currently in the process of updating a 15-year-old map that records levels of traffic noise pollution over the city. When the map was last published in 2000, it showed that 37 percent of people living in Yau Tsim Mong were regularly exposed to noise levels of 70 dB or more. (That’s equivalent to the noise of a vacuum cleaner, or standing a few metres away from a car doing 100km/h). Around 25 percent of people living in Sham Shui Po, Wan Chai, Kowloon City and Tsuen Wan also dealt regularly with excess clamour at the turn of the millennium, with the majority of other districts recording noise disturbance from traffic in at least 15 percent of residents.

So, why is the map only being updated now? In essence, it takes so long because it’s a such a big and expensive job. “The reassessment is about spatial distribution of traffic noise,” explains an EPD spokesperson. “Results of the work will provide information on the road traffic noise environment across the territory. This will help identify problem areas… [and] help to refine the strategies where necessary. An enormous amount of data has to be collected for the reassessment process. The calculation model includes about 130,000 building structures, 2,100km of busy roads, geographic information including hills, terrain, podiums, barriers, road surface types and enclosures, and traffic data such as traffic flow, composition and speed. [It’s] undoubtedly a very time-consuming and labour intensive task.”

The EPD is clearly conscious of the number of people affected by excess noise. “The Government of Hong Kong does care about noise that will affect people,” their spokesperson asserts to us. The department currently operates a ‘four pronged’ approach to combating noise pollution, which includes legislation and mitigation by planning.

It’s slightly easier to mitigate the problem with new roads, which can be built with soundproofing barriers and quieter surfaces. But there are currently around 600 old roads that regularly produce noise over 70 dB. And that’s something that, for now, a lot of people are going to have to put up with. While the department has pointed out that preliminary results of its survey indicate a drop in the number of people exposed to excess traffic noise, compared to the last survey in 2000, there were still 3,859 official noise complaints from the public last year.

“The EPD benchmark is 70 dB, this is an international standard” explains Michelle Wong, communications manager at think tank Civic Exchange. “The problem here is that we do not have any comprehensive study of the baseline of the city’s noise distribution. If we apply 70 dB to different situations, the outcome could be very different. In a commercial centre 70 dB has one outcome. But in a residential area, it is another story.”

Civic Exchange are one group who have regularly called on the government to pay more attention to the perennial issue of noise pollution, which can often be superseded in the public’s consciousness by other, more physically evident forms of pollution. “In noise control, much more effort is needed from the government, business and the public of Hong Kong,” says Wong. “[The government] have mentioned planning as one of the major directions they will take to combat noise pollution. But everybody knows that Hong Kong is a very tiny place with limited land and a huge demand on housing. Planners simply want to take advantage and use every piece of land. But is it always suitable to build a residential area in a certain
location? The alignment of the building also plays a really important role in diminishing the noise impact. For example, the bedroom windows should not be facing a main road directly.”

We visit Mong Kok to find out what residents think of the EPD’s new survey and the preliminary results. Ms Cheung works in a grocery shop and lives on Shanghai Street. “I live on the 21st floor and the noise is still pretty bad,” she tells us. “The lorries for the fruit market start unloading at about 5am. It wakes me up from my sleep. They have another round at 10pm.” Student Lily Ng grew up in the area, and finds the noise from the main road she lives on distracting. “Sometimes I can’t concentrate on my work because of the buses outside the window,” she confesses. “Perhaps it’s just an excuse, but it makes me want to give up on studying my homework! I can’t say it’s got worse since 2000, but it’s definitely no better. I think it is just the same now as it always was. Bad! You kind of get used to it, though.”

The EPD may have spent around $100million per year combating noise pollution, but Civic Exchange are hoping more will be done. “Like many other issues in Hong Kong, there is no proactivity from the government,” explains Wong. “The ideal case would be for the government officials to proactively check construction sites, or the traffic roads and make sure the noise level meets the benchmark, rather than people feeling annoyed and filing a complaint. You can imagine there are more people who are disturbed by noise pollution who are passive and don’t file complaints. They might just think ‘This is Hong Kong, it’s a noisy place’ and endure.